There are lots of terms to describes the various architectural styles of the 20th century, and so much depends on when, where and who is making the definition. Often it is not an architectural scholar but a popular opinion. Often the architects working in a particular style don’t have a neat label for their style, and sometimes that label is coined years later.

Partly due to the increasing popularity of home magazines in the 20th century there was a lot of cross-pollination of ideas and concepts between architects, builders and the home-building public. Often builders and homeowners “borrowed” stylistic elements from an architect’s design and included them with other styles. Architectural styles don’t fit neatly into decades (or years) with a neat start and end date, as builders and developers often worked in styles years after they were cutting edge architecture.

So from a 21st century, Melbourne, Australia perspective (which may be different to a Palm Springs, California perspective) here are a few guides to help with some of the many architectural terms of the 20th century.

[SLSaccordion] [SLStoggle title="Mid Century"] Many people will argue the start and end dates depending on their perspective, however one thing that everybody agrees on is the century. Mid-Century refers to the middle of the 20th century, which is the century that saw an unprecedented amount of innovation and change to western society and the way we built houses. Generally it is agreed that the mid-century decades are from the post-war 1940’s until the mid 1970’s, and it encompasses a whole lot of different architectural styles, including Mid-Century Modern. Mid-Century is not a shortening of the term Mid-Century Modern. [/SLStoggle] [SLStoggle title="Modernism"] Modernism is the most influential movement of the 20th century and was expressed in art, philosophy and architecture. The Bauhaus was a German art school that operated between the wars. It had an enormous influence in the architectural world due to the number of students that left Germany, and who started new lives in America and Australia. International Modernism is the label architectural scholars use for this formal, disciplined style that is so loved by the corporate world. Look at the work of architect Harry Seidler, who was one of Australia’s earliest, influential (and passionate) Modernists, particularly his Rose Seidler House, Wahroonga, to get an understanding of the birth of this movement in Australia. [/SLStoggle] [SLStoggle title="Mid-Century Modern"] While there were many Modernist buildings constructed in Europe before the second World War, Mid-Century Modernism refers to buildings that were built after the war that had a strong Modernist influence. They were often more informal than International Modernist buildings and using Modernist principles many architects were able to develop a new style of architecture that provided light-filled homes in a cost-effective manner, which was very important when building materials were scarce after World War 2.

Robin Boyd was a prolific Melbourne architect, and many of his early designs demonstrate a regional interpretation of Mid-Century Modernism, especially with the relationship between internal and external spaces. In Melbourne, Robin Boyd initiated the “Small Homes Service” in conjunction with

the Age newspaper to make standardised architectural plans available to the public that made good design very affordable for many families. As a result there are hundreds, if not thousands of these homes hidden across Melbourne’s suburbs that were developed in the 1960’s.

Even though the style is generally acknowledged to have run its course by the late 1960’s the term “Mid-Century Modern” was popularised in 1983 by Cara Greeberg’s book “Mid-Century Modern: Furniture of the 1950’s”, and the appeal of this style has had a resurgence in the 21st century. “Contemporary” was adopted by the real estate industry in the 20th century to describe homes in this new style. Unfortunately the term has got stuck in real estate advertising, which is an irony when a 60 year old house is still described as contemporary. To confuse the issue, many real estate agents are now using the word “contemporary” more correctly to describe a home that has been built recently but may have a modernist aesthetic.

[/SLStoggle] [SLStoggle title="Mid-Century Modest"] This is a term that was coined in 2009 by Pam Keuber on her wonderful “Retro Renovation” website to encompass all of the millions of homes that were built in the post-war decades by builders that were fairly traditional, but may include some of the features found in architect designed Mid-Century Modern homes. Secret Design Studio loves working with mid-century modest homes as the scale is modest and they lend themselves to straightforward renovations. [/SLStoggle] [SLStoggle title="Art-Deco"] This is not an architectural style, but an easy term that could easily refer to anything in the 20th century. For some people “Retro” may mean 1930’s, 1950’s or even the 1980’s, but it all depends on your perspective and when you were born. “Retro” is a good, generalist term to use when you don’t want to be too specific.

Art-Deco
Art-Deco was an early twentieth century style that ran parallel to early Modernism but was much more decorative and popular, but waned after the second World War. However in many Australian
upmarket homes of the 1950’s, especially in regional areas, it was a style that was still being used by
many builders. A 1950’s home that has Art-Deco influences is not uncommon. In recent decades it has become more popular with renovators as these homes were often solidly built, with well proportioned rooms, and decorative, geometric details. There are various other terms, such as P and O Style, Streamline Moderne that are closely related to Art Deco. 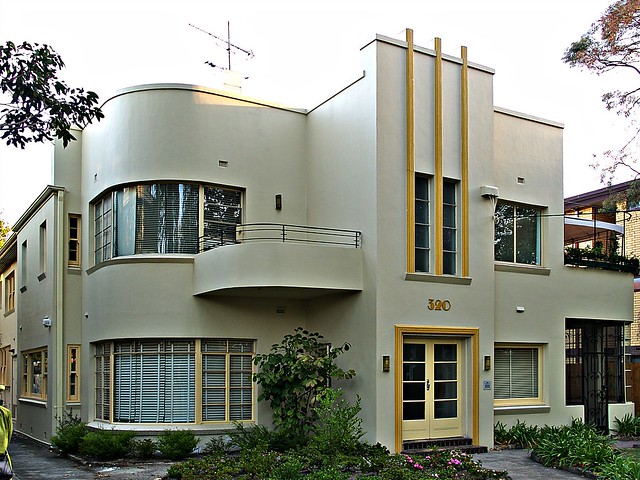 This is not an architectural style, but an easy term that could easily refer to anything in the 20th century.  For some people “Retro” may mean 1930’s, 1950’s or even the 1980’s, but it all depends on your perspective and when you were born. “Retro” is a good, generalist term to use when you don’t want to be too specific. This style falls into the Mid-Century period, corresponds roughly with the 1950’s through to the 1960’s and reflects society’s interests in the space race and nuclear war. Atomic and Space symbolism was a common motif, and in Australia the style was largely restricted to homewares and the occasional playground rocket ship. Closely related is Googie Architecture which was used almost exclusively in commercial buildings, such as car dealerships, motels and showrooms..

The Sydney School was a regional style of residential architecture in the 1960’s that was a reaction against the clean lines of Modernsim, that used rustic, organic materials such as clinker bricks, raked roof lines, stained timber and terracotta floor tiles.

Sydney School architect, Ken Woolley, was engaged by project home builders, Pettit & Sevitt, to design a range of project homes in this style that had an architectural quality that had not previously been achieved by their competition.  The company was very successful, and as a result there are thousands of Pettit and Sevitt homes across Melbourne, Canberra, Sydney and further north.  Due to the success of Pettit and Sevitt there were also lots of small builders who built in a similar style, such as Lucas Morris and Englehardt Homes in Melbourne but who weren’t able to match their widespread success.

Alistair Knox was a Melbourne based building designer who worked in a similar rustic, organic style, often with mud-brick, in Melbourne, and has hundreds of examples still standing.

Many people do not appreciate this style of architecture, as they are so different to today’s contemporary, clean finished homes.  However once you understand that they are designed to be dramatic, with their heavily textured finishes, their soaring cathedral ceilings, their earthy colours, and the contrast between light and dark, they make today’s standard home offerings seem very bland in comparison. This is a style that was popular from the 1950’s to 1970’s and descended from Modernism. It is
opposed to the lightness of structure often seen in mid-century modern buildings with the use of off-form concrete and concrete blockwork. It was commonly used for institutional and civic buildings so residential examples are rare. The strength and masculinity of the style is very polarizing, and there are not many intact residential examples in Melbourne. Perhaps the best known Brutalist architect in Australia was Perth’s Iwan Iwanoff (Ivanoff). 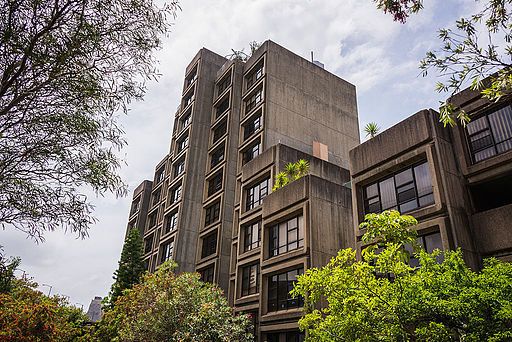 Post-Modernism is a late twentieth century movement that was a reaction against Modernism and everything that it represented. It is a slightly awkward style that was never widely popular, and spoke in an architectural language that was elitist. Maybe one day, in the future, Post Modern architecture will have some fans – apparently some people born in the 21st century consider Post

Modernism and Memphis Design retro!. Unfortunately it is also a term occasionally used in real estate advertising by those who don’t understand our architectural heritage.